A2J Author® allows authors to branch or set variables based on simple logic conditions under the Advanced Logic section in the Question Design Editor (Figure below). Scripting conditions in A2J Author 6.0 is significantly different than drafting them in earlier versions of the software.

Creating conditions is done by typing into the “Before” text box or the “After” text box. By placing the scripting in the “Before” box, A2J Author knows to evaluate that condition before the end user sees the question that contains the logic. By placing the scripting into the “After” box, A2J Author knows to evaluate the condition after the end user presses one of the buttons.

If a condition is tested before a question is displayed and the condition is true and the action is to move to another question, then the end-user will not see the current question. If the same condition is false, then the opposite is true.

The expression to be tested is typed directly into the “Before” or “After” boxes. For example, suppose a question asks for annual income. Let’s assume that if the end-user had entered a number greater than $35,000 that they would then need to answer a different set of questions. To reroute the end-user, write a condition similar to the one in the figure below. A2J Author® would evaluate whether or not the income equaled an amount over 35,000. Based on whether that evaluation equals true or false, the author can then tell A2J Author to send the end-user to a particular question. 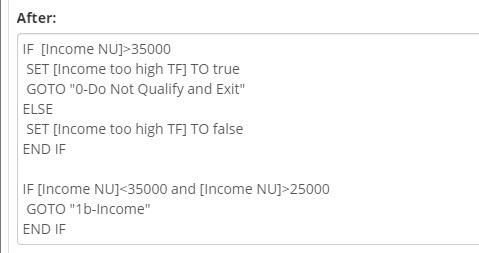 Figure: A sample "after" advanced condition.

The logic commands that can be used include:

Each logic command must be on its own line (hit the enter key or a hard return) after each command statement.

Example: You cannot have

Variables can be evaluated in a condition using the following operators:

Remember to always enclose variable names in brackets [  ] when evaluating them in a condition.

A2J Author® also allows the use of AND and OR logic in the expressions. (These operators can be scripted in either lowercase or uppercase letters.)

You can also use functions within logic statements. To learn more about functions, check out the functions section of the A2J Authoring Guide.

There are two possible actions following the evaluation of a condition: SET a variable to a value and/or GOTO a question. Set variable to value allows any variable to be set to a particular value or expression. GOTO a question allows authors to reroute (or branch) the end-user to a different question than had the condition evaluated differently.

‹ The Buttons Section up Functions ›
Powered by Drupal