This chapter will demonstrate how to manage variables under the Variables Table and Variables Editing Window. This chapter will provide a detailed look at the properties of each variable type, including the program variables which control the gender and skin tone of the Avatars, optional sign text, version, guide id number, and whether an end user has completed an A2J Guided Interview. Finally, this chapter will explain how to import the template’s variable names into A2J Author® from a HotDocs® component file and keep track of your associated HotDocs® template.

The Variables Table (Figure 5a) contains a list of all of the variables in your A2J Guided Interview. It is organized into columns. The Variables Editing Window is where you can edit variables and can be accessed by double-clicking on any variable name (Figure 5b). 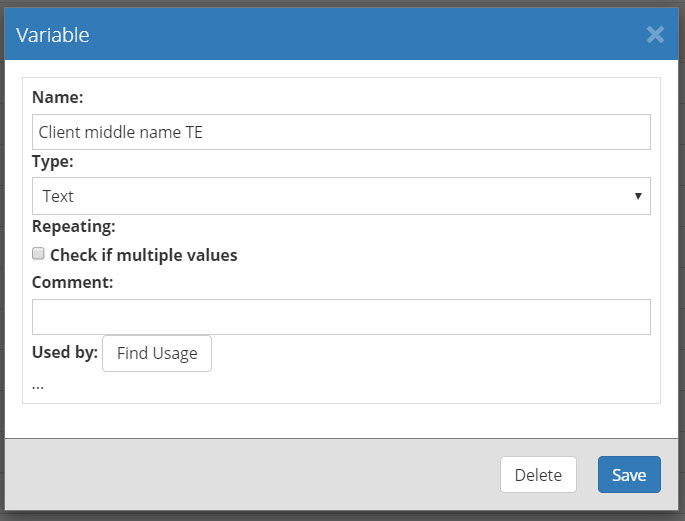 Figure 5b: The Variable Editing Window 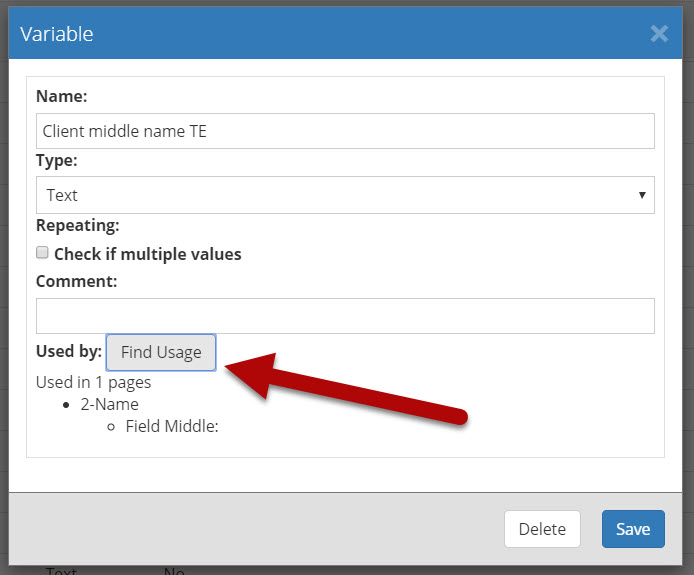 The Variables Table and the Variable Editing Window indicate the names of variables, and give you an opportunity to delete or edit variable names.

The Variable Table indicates what variable “type” is assigned to each variable. The Variables Information window will allow you to change the assigned type.

Each variable can be assigned one of the following types: Text, True/False, Number, Date, and Multiple Choice. A variable’s type can be changed by clicking on the variable name and editing the type in the Variable Editing Window (Figure 5d). 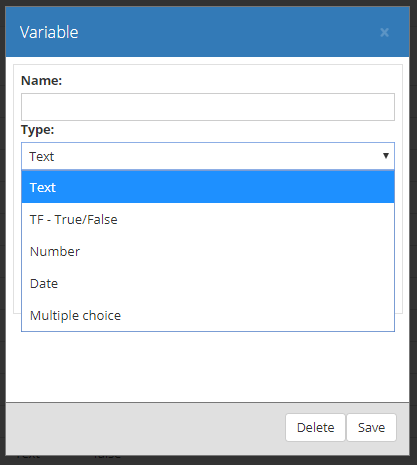 A variable’s “type” determines how the data collected in that variable will later be evaluated. Thus a “variable type” is much different from a “field type,” which merely designates the format in which the data will be collected. For example, a variable entitled “Phone number TE” may be assigned the field type “Number Phone,” which tells A2J Author® to provide a field with gray suggested formatting of (xxx) xxx-xxxx. But, the variable type assigned to “Phone Number TE” would be “Text,” because the phone number will never be used in a numerical calculation. Rather, a phone number is treated as text.

Also, variable names are case and type sensitive. So a variable’s name and type must match the variable used in the template or content management system. If not, any data collected by that variable will not populate in the intended field.

For a complete description of all variable type properties, please see the main subheading below entitled Variable Type Properties.

The entry in the “repeat” column of the Variables Table, and the checkmark indicating “repeating” under the Variables Editing Window, indicate whether a particular variable has been used within a repeat dialog (Figures 5e & 5f). So, the indication suggests that the variable may collect multiple values during the interview. 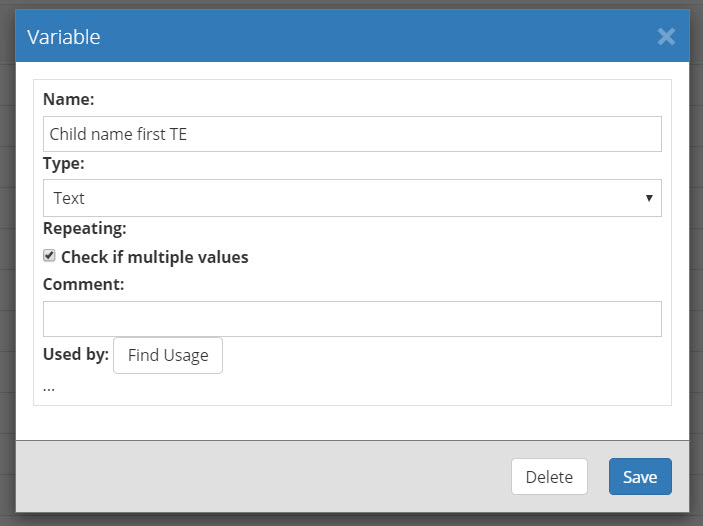 The chapter entitled “Creating Questions” provides a detailed explanation of how to create repeat dialogs.

The comment column contains information that you may wish to note about the variable. It is purely for reference purposes. It tells a future author what the variable is supposed to do. It is especially helpful for variables that are used behind the scenes to conduct calculations.

Each of the following variable types is described below:  Text, True/False, Number, Date, and Multiple Choice.. In addition, the following A2J Author® program variables will be described:  User Avatar, User Gender, A2J Step (1, 2, etc.), and A2J Interview Incomplete TF. The other program variables A2J Bookmark, A2J History, and A2J Interview ID are used internally by the authoring system and cannot be edited by the author, so they will not be covered in this Authoring Guide. A2J Navigation is a legacy program variable from version 4.0 and earlier of A2J Author. It is no longer used in A2J Author 6. The charts included at the end of this section provide a quick reference to the properties of each variable type.

Secondly, a True/False variable can be manually set in the context of two buttons. If two Buttons are created, you have the option of manually assigning a variable and variable value to each. So, for instance, if you were to provide a selection of two buttons in order to advance to the next question – let’s say you provide the options “yes” and “no”  as options for answering a question – each Button could be assigned the same variable, one with a default value of True and the other False. (See the Buttons subheading in the Creating Questions chapter.)

The Multiple-choice variable type does not allow for collecting multiple values or selections from a set of multiple choices for a single variable. To provide the end-user with an option of selecting multiple items from a list, you must use True/False variables in coordination with Checkbox fields.

Program Variables for Gender and Avatar

There are two program variables that change the presentation of the Avatar Guide and User Avatar: User Gender and User Avatar. The variable “User Gender” determines whether the Avatar Guide speaks to a male or female Avatar. The value for this variable must be collected early in the A2J Guided Interview, in a Gender field, in order for the Avatars to show up in the interface. The variable “User Avatar” determines which avatar group is chosen, changing the Avatar Guide and the End User Avatar’s skin tone to one of the options chosen by the author (see Appendix B for Avatar images). ***COMING SOON: New way to ask the end user to select an avatar, along with 6 additional user avatar options** (Expected by end of 2019)

There are thirteen “step” variables, one for each possible “step” in A2J Author®, as follows: A2J Step 0, A2J Step 2….A2J Step 12. These variables allow a step’s sign to be customized. For example, a sign defined as “Spouse’s Information” under the Step Tab, can be reflected later on as “Jessica's Information” (Figure 5g). 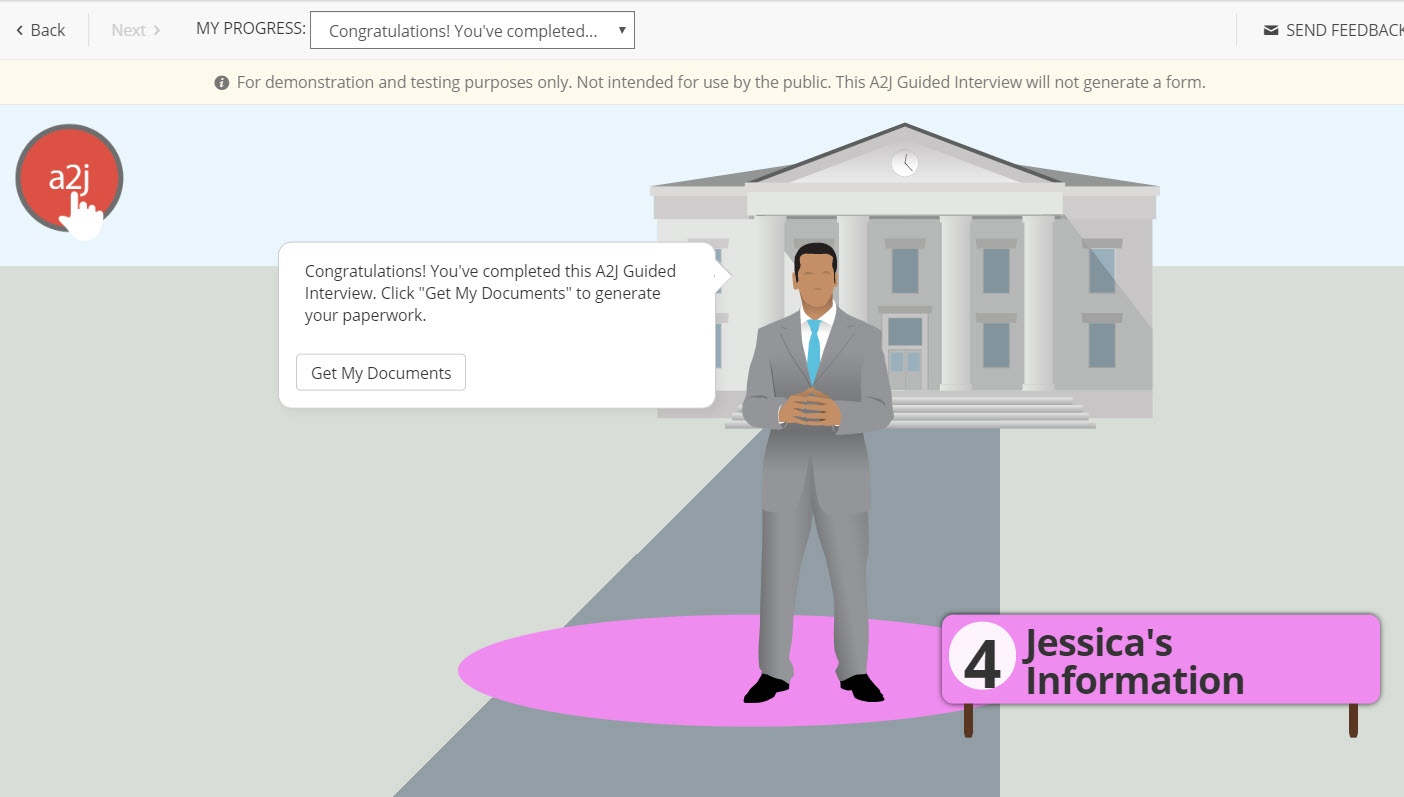 In order to accomplish this customization, you need to collect a value that you eventually want to use in a sign’s text. So, “Spouse name first TE” might be used to collect a spouse’s first name. Following the collection of a value for that variable, you can then set the desired step variable equal to the value previously collected plus whatever other text you would like included in the sign. Thus, A2J Step 4 could be set equal to: %%Spouse first name TE%% + “’s Information”. Setting a step variable takes place under the Advanced Logic section of the Question Design Window (Figure 5h).

The A2J Interview Incomplete TF program variable applies when an A2J Guided Interview® has been enabled with the Exit feature which allows an end-user to exit to the LHI server before they have completed all of the questions. Upon selecting the Exit button provided by the author in the Exit Question, the A2J Interview Incomplete TF variable is set to true. (See the Creating Questions chapter for a complete description of the exit to save incomplete data feature.)

Figure 5i: Variable macro in the context of question text.

Macro to Set a Variable’s Value

Figure 5j: Using a macro to help set the value of a different variable.

Macro to Set a Label

Ultimately, you want the name of the primary guardian (Figure 5l) to be reflected in the variable “Primary guardian TE.” In order for the selection’s value to populate this variable, you can see the below logic (Figure 5m).  You can also set the Backup guardian TE variable as well. 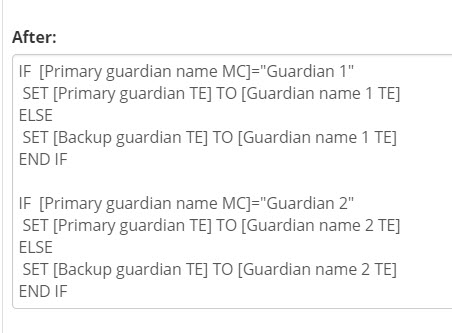 An entry in this field is for informative purposes only and has no effect on the coordination of the interview and template on a server. 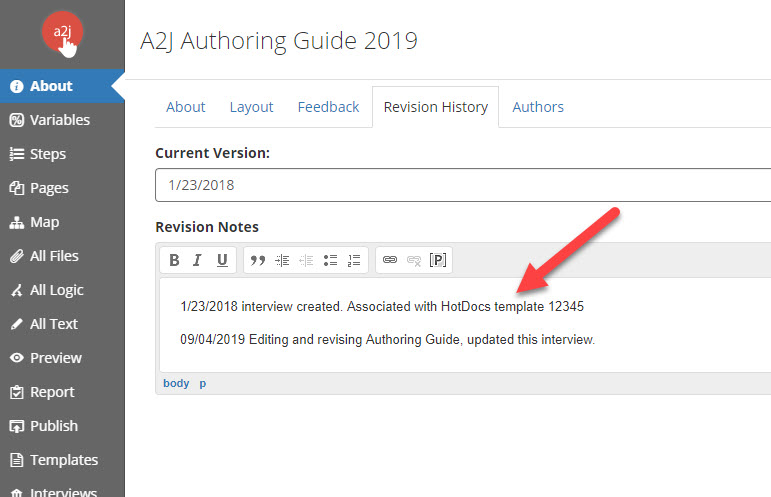 Figure 5n: Revision History section in the About Tab with HotDocs template information.

Variable names stored in a HotDocs® component (.cmp) file can be imported into an A2J Guided Interview. This import feature is located at the top of the Variables Tab screen and is indicated by a button labeled “Add from HotDocs .CMP” (Figure 5o).

To use the “Load Variables” function, click on the button to browse for the correct component (.cmp) file for the corresponding HotDocs® template. After selecting the component file, all variable names will be loaded into the Variables Table.

‹ Chapter 4: The About Tab up Chapter 6: The Steps Tab ›
Powered by Drupal